Where Will the Pain Be? OCPP's subprime maps can help legislators target education about foreclosure scams addressed by HB 3630

The U.S. home loan market is failing in spectacular fashion. A housing bubble created partly by lax consumer protection laws has burst, sending delinquencies and foreclosures soaring and hobbling the national economy. While Oregon has so far avoided the worst of the crisis, recent trends are worrisome. Home prices have turned negative in a rising share of neighborhoods and delinquencies are surging. Oregon's housing troubles may only get worse.

Driving the housing market's collapse are subprime loans, high-cost loans often issued to borrowers with impaired or no credit history. As of the third quarter of 2007, payment was past due on more than one in ten subprime loans in Oregon, and the delinquency rate on these loans was rising.

Policymakers and elected leaders can best ameliorate the impact of rising subprime delinquencies if they know where subprime loans are concentrated. For instance, the Oregon Legislative Assembly is debating HB 3630, which would establish new consumer protections for borrowers facing foreclosure. If the bill becomes law, legislators and the Oregon Department of Consumer and Business Services could target public education efforts about the new law in neighborhoods at higher risk for foreclosures.

But where are the potential trouble spots? OCPP has developed maps showing the concentration of subprime loans by census tract for each state legislative district (see appendix).

Among legislative districts with the highest share of subprime mortgage originations in 2006 were those of legislative leaders: Senate President Peter Courtney (36.9 percent), Senate Republican Leader Ted Ferrioli (31.4 percent), and House Speaker Jeff Merkley (35.7 percent). Even in the district with the lowest share of subprime loans, Representative Sara Gelser's House District 16, one in eight residents who took out a home loan in 2006 (13.0 percent) received a subprime loan.

Of course, factors besides subprime loans impact the foreclosure rate. These include declining home prices, a weak local economy, or a high concentration of risky mortgage products besides subprime loans. But with subprime loan delinquencies already high and rising, census tracts in which these loans are concentrated should concern policymakers and those seeking to ameliorate the problem through public education and other means. 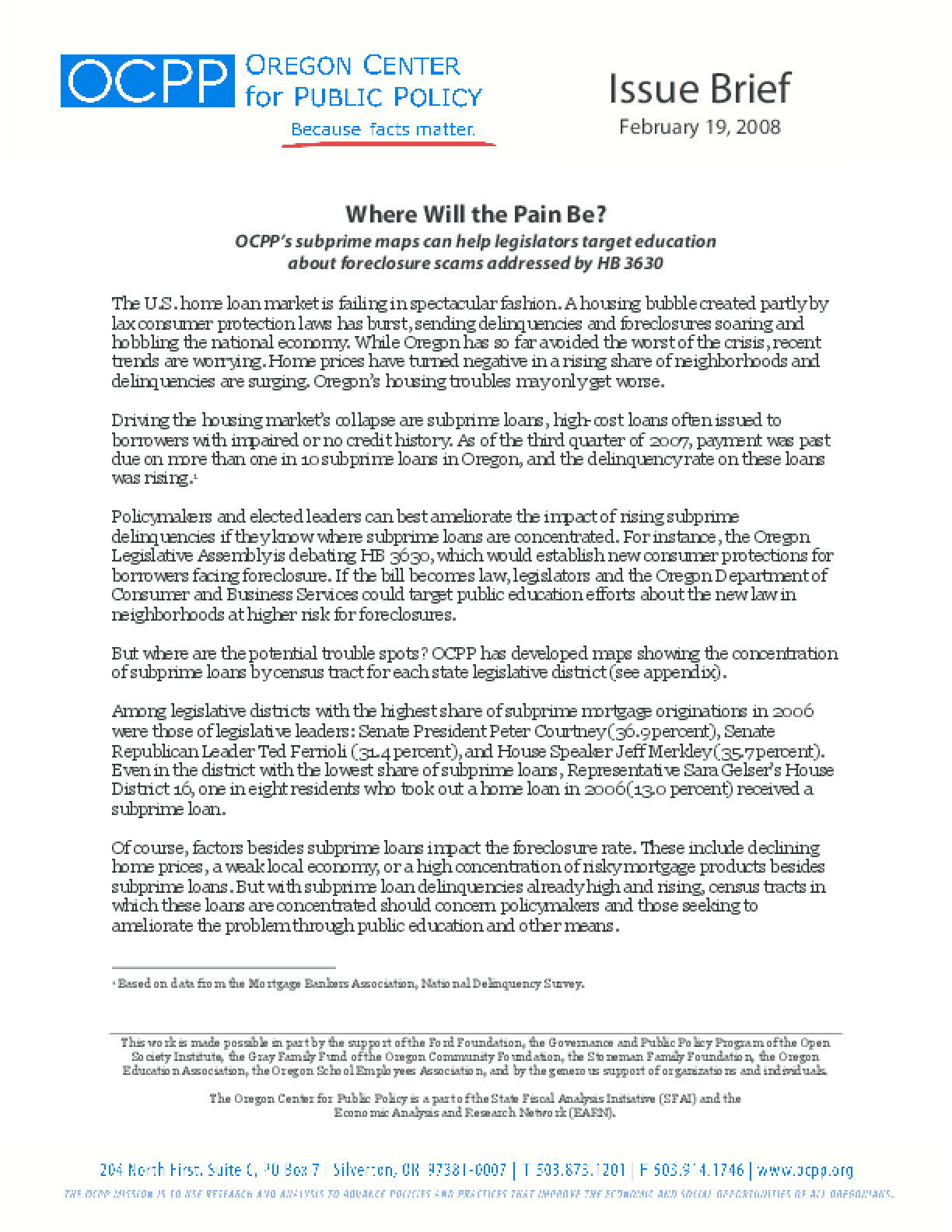