The Student Safety Act (SSA) requires that the New York City Police Department publically issue quarterly reports on arrests, summonses, and other police-involved incidents in New York City public schools.i The 2017 calendar year is the second year in which the NYPD reported on activity in schools by officers outside of the School Safety Division, giving a more complete picture of the impact police have on the educational environment. iiSince 2012, the number of arrests and summonses issued by School Safety Officers (SSOs) has consistently declined. In 2017, SS0s were responsible for less than 15% of arrests and 2% of summonses. However, the vast majority of police interactions with students in school are not with the school safety officers specially trained to work with youth in schools, but with other law enforcement officials, including armed patrol officers. In addition, 366 arrests (29% of total arrests in schools) were for incidents that occured off school grounds and had no relationship to the school, indicating that police may be using schools as a place to locate and arrest young people for non-school related offenses. This practice sends the harmful message that kids in trouble should stay away from school.The School Safety Division has made a significant effort to reduce the use of summonses for non-criminal offenses. In 2017 they issued just 18 summonses, down from 1,275 in 2012. Summonses for disorderly conduct, including unreasonable noise, fighting and obscene language, are not an appropriate response to student misbehavior. However, precinct officers are not required to follow the same procedures as the School Safety Division, and officers issued nearly 900 summonses, sending children into the criminal justice system for misbehavior.Black and Latino students continue to bear the burden of arrests, summonses, and police interactions in school, and the city has failed its responsibility to reduce the racial disparities in its school safety program. Black and Latino students represent 66.9 % of the student body, but 90.2% of arrests and 89.3% of summonses in school. They also accounted for 88.4% of child-in-crisis incidents, 87.9% of juvenile reports, and 89.5% of mitigated incidents. Students of color were also more likely than white students to be handcuffed for school misbehavior, even where there is no criminal activity. Black and Latino students accounted for 92.5% of juvenile reports and 94.4% of mitigated incidents where handcuffs were used, as well as 93.4% of child-in-crisis incidents where handcuffs were used. 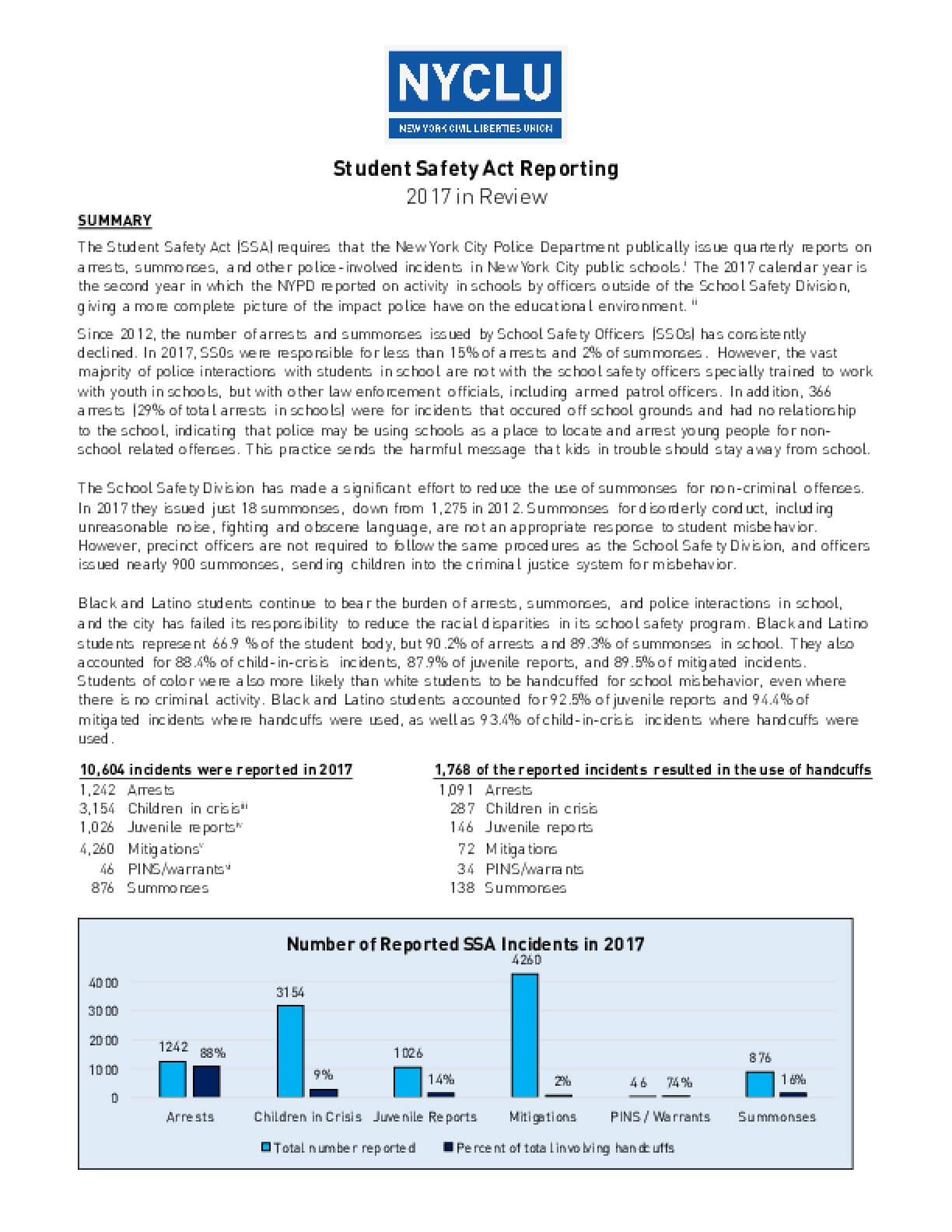