Investing in Freedom: Democracy Support in the U.S. Budget

The U.S. Congress should fully fund the administration's $47.8 billion request for base international affairs for Fiscal Year (FY) 2014. This request represents a 6% reduction from FY 12 funding levels and a 14% reduction from the FY 13 request, reflecting the difficult budget environment that lawmakers currently face. The foreign affairs budget, which represents less than 1% of the annual U.S. budget, provides an invaluable set of tools for advancing U.S. foreign policy interests. The relatively modest investments that fall under the international affairs budget bear great returns, as the American government helps develop stable, democratic partners that cooperate on trade, security, immigration, and economic issues. Amid weariness among the American people with military engagement overseas, diplomacy is an inherently less costly means of advancing interests.


In repressive countries, the smallest amount of U.S. assistance can bring hope and provide a lifeline to those who face imprisonment, torture, or even death for speaking out in support of freedom, while helping to engender the next generation of potential leaders. Recent developments in the Middle East, Russia, Burma and elsewhere show the importance of robust, strategic, and flexible funding for the United States to respond effectively to quickly changing situations on the ground and continue to play a leadership role in the international community.


The budget plans produced by the House and Senate for FY 14 differ greatly from one another and from the President's request. The House Republican budget resolution would fund international affairs at $38.7 billion for FY 14, 20% less than the President's request, and a staggering 29% less than the FY 12 actual numbers. Cuts of that magnitude would have a devastating effect on the ability of the State Department and U.S. Agency for International Development (USAID) to carry out their diplomatic work and assistance programs. While it is important at present for every federal agency to eliminate redundancies, streamline operations, and reevaluate priorities, such sweeping cuts to an already miniscule budget would do great and needless harm. The Senate budget resolution proposes $45.6 billion in base international affairs funding.


Funding for Democracy and Human Rights represents 9% of the total request for foreign assistance for FY 14, less than 1/10th of 1% of the total U.S. budget. The administration's proposal will support important initiatives that protect and promote democracy, rule of law, and human rights, including:


Increases in some areas are balanced by decreases in others, including:


While the administration understandably has had to make difficult tradeoffs to reach budget goals, there are some areas where decreased funding would be harmful to achieving U.S. strategic policy goals and Congress can provide additional support:


Congress should fund the State Department's Bureau of Democracy, Human Rights, and Labor (DRL) and USAID's Bureau of Democracy, Conflict, and Humanitarian Assistance (DCHA) at the FY 12 levels. These two bureaus provide leadership within their agencies on democracy and human rights policy and require adequate resources to continue doing so.


The administration must work with Congress to identify innovative ways to support civil society in countries with difficult operating environments, including Russia, Bolivia, Egypt, and Ethiopia.


Robust funding for international affairs in FY 14 will give America's diplomats the tools they need to advance U.S. interests abroad and maintain the United States' role as a global leader. Such funding alone is not enough, however. The administration must match a strong budget with clear policy decisions and a consistently forceful message, communicated both publicly and privately, that democracy and human rights are of the utmost importance to the United States.


This report summarizes the most notable requests, changes, and new developments within the administration's democracy and human rights budget for FY14. It also offers policy recommendations and suggestions for budget adjustments to better align funding allocations with U.S. interests. 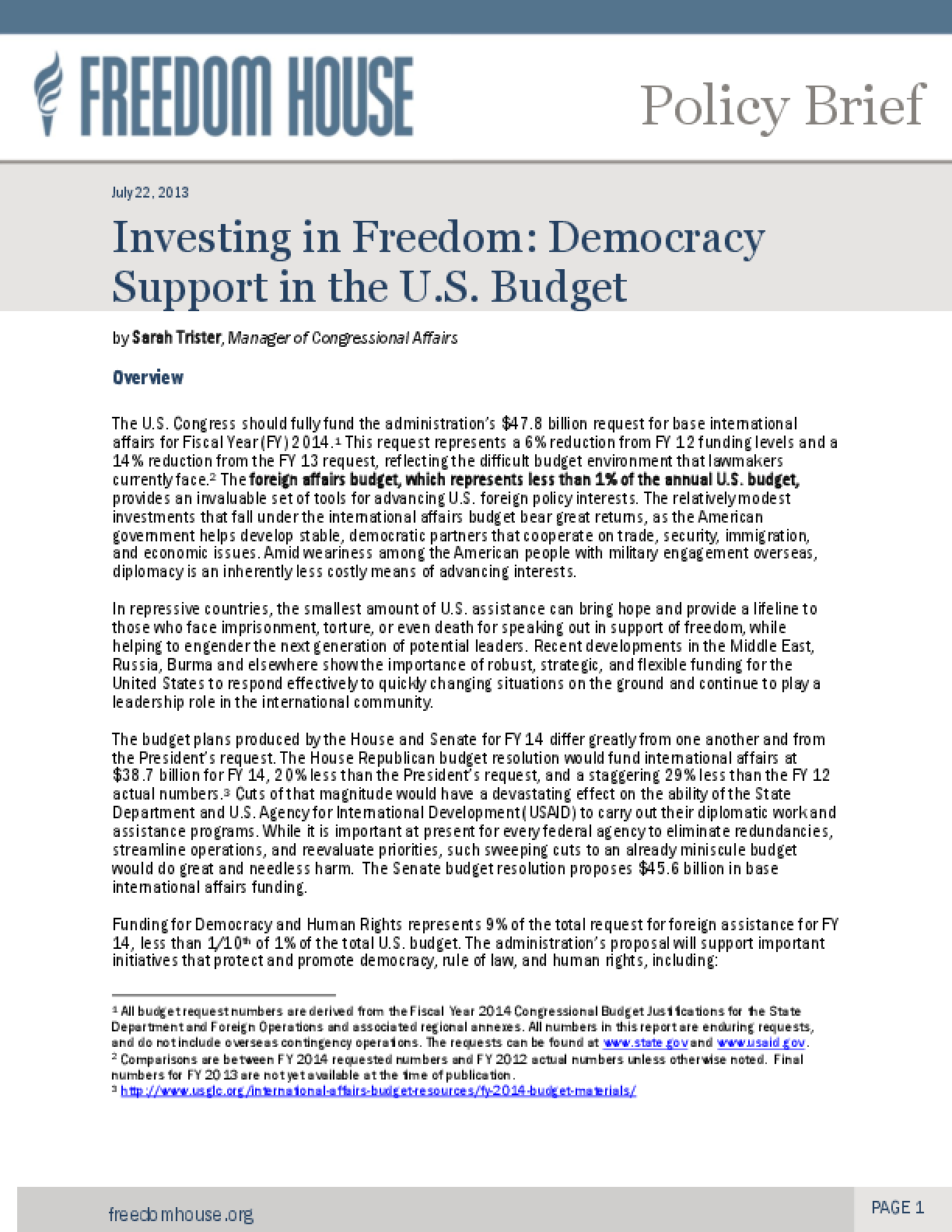